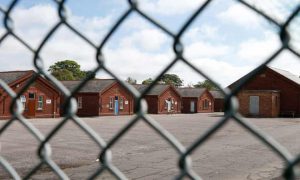 If you cared about the plight of refugees you would want to ensure that you were helping real refugees and. where possible. helping the most vulnerable. You would recognise that our capacity to absorb and help refugees has inherent practical and financial limits, and the more stress you place on those limits, the less we are able to help individuals. At best, presently, we can only supply basic provisions, and with no limits observed the public is beginning to resent even that.

We’re now getting to the point where conditions for asylum seekers in the UK is not much better in material terms to living in a refugee camp. In either case you’re in a state of limbo with no idea when it’s going to end. It’s not living. That state of limbo is going to last far longer if there are thousands of people ahead of you in the queue waiting to have their claims processed. Thus, if you’re not concerned about overburdening the system, you cannot claim to be interested in the welfare of refugees.

If you’re at all sensible, you’ll recognise a big part of helping refugees is having the public on your side. If you want more resources to do a better job then broader public sympathy matters. That sympathy comes to an end if caring for a limited number of the most vulnerable refugees becomes effectively an abandonment of border controls.

When we see refugee advocacy moving to end the housing of migrants in barracks and hotels, we’re then talking about heaping yet more obligation on to councils at a time when council tax is rising and living costs are going up. One notes that the PR spokesthings of refugee advocacy groups are usually telegenic middle class twentysomething girlies (with pronouns in bio) for whom this is no real concern. I see them on Twitter all the time and their attitude on this issue is a flawlessly accurate predictor of all their other politics. They tend to conform to the FBPE mold of remainer where anyone who thinks differently is an “actual nazi”.

In that respect, the Dover dinghy arrivals are weaponised for use in the culture war against the right. It’s not about doing what’s right for refugees. They’re used as a battering ram, doing everything possible to frustrate government efforts to do what they were elected to do. They’re not actually interested in maintaining public support, not least because they don’t rely on the public for funding. The Refugee Council has a total income of £12.6m, funded by councils, trusts and foundations. Their income is all but guaranteed as are those “competitive executive salaries”.

Like so much of the NGOcracy, of which the RNLI is now a part, they form a blob of lobbyists who are not in any way accountable and see public opposition to their agendas as an obstacle to circumvent rather than engage with, and by way of being deeply embedded with government, they’re in a position to do exactly that – to the point where they feel safe enough to openly attack political opponents. They are not by any means politically neutral. Meanwhile, the BBC, particularly the World Service has effectively become an Oxfam propaganda bureau.

This blob is to the Labour party what the various right wing think tanks are to the Tories. If you vote them in, their stooges are appointed to SpAd roles. It’s why Oxbridge girlies rough it on £30k a year as social media influencers knowing that if the Tories lose an election they’re in pole position to take a lucrative senior adviser role and subsequent consultancy work. They already have direct access to the political machinery by way of providing “experts” to opposition parliamentary committees. If they knock our a PDF report that day they’ll get airtime on Radio 4. The NGOcracy is just as much a greasy pole as think tankery, and on the left, there’s very little separation.

Like any other blob, this one has become wholly self-serving and is more about social status than actually accomplishing anything. As self-declared “citizens of nowhere” they have no particular loyalties to Britain and will sell their souls to the highest bidder. The EU provided them with no end of jollies and seminars and opportunities to congregate with other European NGOcrats, with a view to taking up a well remunerated role in the Brussels apparatus, which is is why they hate Brexit with every fibre of their being. It’s cut off a career avenue whilst Labour is in opposition.

There is a compromise to be had on asylum. If the public genuinely believed we were helping the most vulnerable there would less opposition. Some refugee camps around the world are a living hell while other are long established and no worse than the places people are displaced from. We could be taking women and children out of the hell holes, or resettling families directly from refugee camps. Instead, though, we are expected to believe that men of fighting age with the means to pay smugglers qualify as refugees while the NGOcracy does their legal, political and propaganda work for them. At this scale it’s hardly surprising it’s an issue that could topple the Tories.

That makes the Dover invasion a win-win for the NGOcracy. They’re already deeply embedded in the civil service and the wider establishment, but if the Tories lose then the money tap is turned on. Thus, the NGOcracy has a vested interest in actively opposing any measures to stem the flow even if it means worse conditions and longer waits for existing asylum seekers. As much as migrants are being used by France and Belarus, we have our own fifth column who are just as happy to exploit them for financial and political gain. The next stabbing rampage pegged on “mental health problems” is entirely on their hands.