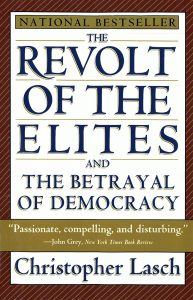 Lasch was most active in the late twentieth century yet it would seem he was seeing into the future with this book and his equally (or more) famous book, The Culture of Narcissism. In Revolt of the Elites he posits that the degeneration of Western Democracy has been caused by the abandonment by the wealthy and educated elites of their responsibilities to support culture, education, the building of public facilities, etc. in these societies. The rich and educated in Western Liberal, Capitalist, Democracies have, since the 1970s, increasingly abandoned society, keeping all of their earnings to themselves and have adopted a listless transient existence forgoing any significant commitments to community. This, Lasch tells us, is a new phenomenon; where in the past the elites, the wealthy and the educated gave freely of themselves and their earnings to help bring to their communities the finer benefits of the capitalistic, liberal democratic system of society and governance, now this strata of society gives little, aims to pay as little tax as possible, and does not regard themselves as belonging to any community at all. This, Lasch maintains, is causing the breakdown of the Western Democracies, the United States in particular. Democracy itself is not so much under attack by this phenomenon, but withering away from lack of interest as it were.